In a previous post, I mentioned that I’d been given some lovely material when I went to the Stitch Gathering in Edinburgh last year. I used this fabric (from Cori Dantini’s The Makers collection) to make a quilt for a friend’s new little arrival, Lily. Unfortunately, I ran out of fabric before I could finish the quilt and was a bit stumped as I couldn’t seem to find much online. Happily this problem was resolved during a recent trip to The Fabric Guild where I discovered several fat quarters  in the same collection so  I could finally crack on with finishing it. I was quite relieved as I was a bit worried that Lily might have grown up before I could present her with the finished quilt! 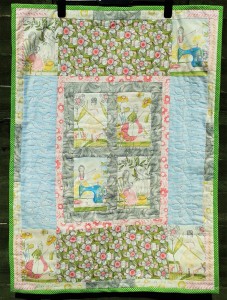 As I only had fat quarters, I decided to sew them all together in a courthouse steps design so that I could create a backing ‘fabric’ for the quilt. It was a little bit improvised and I just carried on adding strips to the main square but I do think that it looks quite good.

I did a little bit of free-motion quilting on each side in a flower design (about the only design that I can successfully complete at the moment). I know that the recommended stitch-length for free-motion sewing is about 1/8 of an inch. Sometimes I achieved this…sometimes I didn’t…but I don’t think it looks too awful overall! I also sewed a few hearts at the top and bottom of the design and added a bit of ‘stitch-in-the-ditch’ quilting just to join the middle section to the backing fabric.

I took my quilt top to a nearby sewing emporium to ‘audition’ binding for the quilt as I wasn’t quite certain what would work as a border. I hadn’t expected to choose green but I think it works wonderfully and really brings the colours together. I finally bought the binding from Higgs and Higgs, who have a brilliant selection. Definitely a good find for future makes.

This is my second completed quilt and, as ever, I learned a few things whilst I was completing it:

I really do feel that I am developing my skills in this craft and I am also particularly proud of my mitred corners! I do hope that Lily will like it!

Well, I hope that you are enjoying this sunny afternoon wherever you are. Look out for my next post, which will undoubtedly feature my annual visit to the Festival of Quilts. Only a week to go!!!

Hello readers. If you read my last post in November, then you’ll know that all has not been rosy in the land of Thimbles and Teapots. For months, I could barely function and I stopped sewing, baking, singing and writing; essentially all of the things that make me happy. It’s been extremely difficult but I think that I can finally say that, with the exception of a few ‘off’ days, there may now be a little light at the end of the tunnel.

Before I start, let me just include a picture of these beautiful flowers; a gift from my father-in-law:

I have just finished reading a book called The Happiness Project by an author called Gretchen Rubin. One day, Gretchen realised that she wasn’t entirely satisfied with her life. She wasn’t exactly unhappy, but there were aspects of herself and her relationship that she wanted to change. She set about doing this by creating a series of resolutions for each month over the course of a year. She blogged about her experiences and inspired others to start their own happiness projects. I thought that I would try to introduce a few resolutions into my own life too. According to Gretchen, resolutions differ from goals as they are ongoing small changes that you aim to introduce into your daily life. I particularly liked her resolution to sing every morning. I love singing. I used to sing all of the time. When I was younger, I took part in our school musical productions and I was in just about every choir possible. My parents encouraged me to play a musical instrument so I took up the flute but I just didn’t feel the same way about playing the flute as I did about singing. Since being ill, I haven’t felt like singing very much, even though it improves my mood and makes me feel happy. My favourite songs are those by the old-school artists such as Frank Sinatra, Ella Fitzgerald and Nina Simone. My husband thinks that I was born in the wrong era. He might well be right. I would love to wear one of those beautiful flowing dresses (one that has been shortened to fit a petite woman) and sing along with a swing-band.

My unfortunate sewing-machine had disappeared under a pile of house-junk (you know, the sort that accumulates when you don’t have time to do any proper filing or tidying) but I finally unearthed it just over a month ago and started trying to complete a few small projects. I was advised that mini-achievements would help to improve my poor, battered confidence. Whilst there is still a way to go, I believe that it might be working. I did feel happier whilst I was running fabric through my machine and it was a good distraction from the negative thoughts that sometimes circulate in my brain. My first project was this this little owl (the kit was a Christmas present from my sister-in-law): 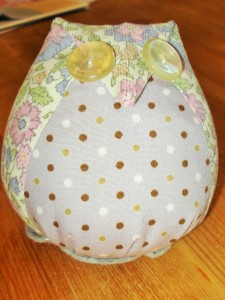 I’ve still been receiving my Love Patchwork and Quilting magazine, which often comes with small patchwork projects that can be completed very quickly. I made this sweet little house for a friend:

The latest edition of Quilt Now was accompanied by a guide, written by Eva Larkin, to free-motion quilting: 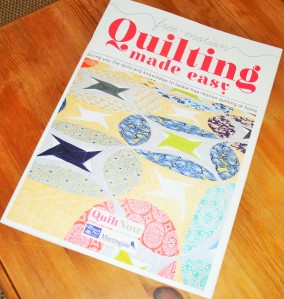 Now that I have a darning foot for my machine, I can finally learn how to do this and, in the spirit of completing small, achievable tasks, I’ve undertaken to follow the steps provided in this guide. I have to say that it’s pretty tricky and, for a perfectionist such as myself, quite frustrating! So far, I have learned about setting the tension, sewing a spiral and have been practicing my ‘squiggles’ on paper:

If nothing else, I quite enjoyed using my coloured pencils again.

A couple of weeks ago, I finally felt well enough to bake a cake (my first bake in over four months) so I made my husband’s favourite, Nigella Lawson’s chocolate and Guinness cake. This cake is yummy but it’s a bit ‘high-faff’ as baking goes. You can’t just shove everything into your bowl and give it a good mix, you have to first melt the butter with the Guinness in a pan then gradually add the other ingredients (some of which need to be mixed in a separate bowl). By the time I’d put the cake in the oven, the kitchen and myself were covered in cake batter. The cake is covered with a layer of frothy icing (to represent the head of the Guinness) made from cream-cheese, icing-sugar and whipped cream. If ever there was a cake to make you happy then this is probably it. I think that my husband likes this cake even more than he likes Ms Lawson herself 🙂

Since it is now March, here is a picture of daffodils:

I’ll leave today’s post with a picture of my (admittedly somewhat grumpy) cat Marmalade having a rest on my quilt: 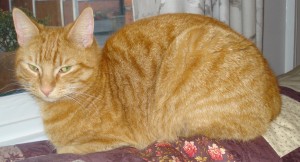 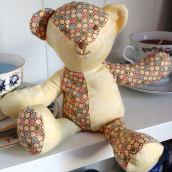 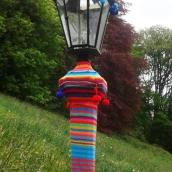